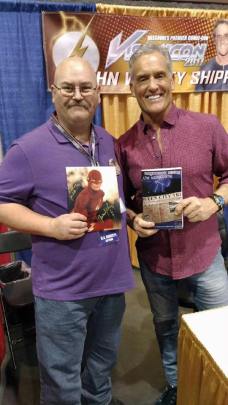 This weekend, I was a guest at VisionCon in Branson, Missouri. It was an amazing convention and the staff did an incredible job taking care of every detail. I’d like to say a big thank you to everyone who put so much time and effort into making VisionCon 2017 such an awesome experience. I can’t name everyone involved, so please, you know who you are, accept my deepest gratitude and respect. You all are amazing. If you haven’t attended VisionCon before, I strongly urge you to attend in 2018.

They featured some incredibly talented people there and I was proud to be considered one of them. I didn’t get to spend much time with them since I was busy at my own table, but I was thrilled to get to know a few of them. I found the people that I spoke to were both friendly and gracious. The represented the best in their fields and it was a pleasure to work beside them.

I’ll go into a bit about the people I got to know. First, the “Brothers on Whatever” are a radio show out of the St. Louis area. The show is ran by brothers, Brandon and Nate Shaw. They are very cool guys and I was honored to be featured for an interview on their show. When they are finished editing and post the links, I’ll be sharing them on my social media.

Samuel Rikard is a fellow author and great guy. He’s the author of the fantasy series, The Eldarlands. If you haven’t read them, check them out on Amazon. You’ll be glad that you did. He’s a very cool guy and fun to chat with. If you happen to see him at a show, swing by his table and talk to him. Tell him D.A. sent you.

Shane Moore is another author. He writes a wide array of genres, including the zombie genre. He took the time to give me advice on several things and even helped my son by doing an interview on his youtube stream. He’s larger than life and easy to spot with his signature mohawk. If you see him at a show, stop by and say hi. Check out his work on Amazon.

The highlight of the show, for me, was meeting John Wesley Shipp. I’m sure you all know him as Jay Garrick on the C.W.’s hit shows, The Flash and Legends of Tomorrow. Those of you closer to my age will remember him from the Original Flash Series in the early 90’s where he played Barry Allen, aka The Flash. So, he’s played “the fastest man alive” for quite some time. The story on how we met is kind of cool.

I was walking by his table with Phil Morrissey, the artist who does all of my book covers. Phil wanted to stop and speak to Mr. Shipp’s assistant about having a few items signed for friends. While he was speaking, I was standing behind him just waiting for him to finish. John was behind the table, but I didn’t really want to bother him. After all, he’s a celebrity. No one was more shocked than I was when he came around the table to speak to me.

He had seen my Dark Water Fiction ID badge that I wear at every convention. It has my name, the Dark Water Logo and the word Author on it. He noticed it and wanted to ask me about my books. John Wesley Shipp wanted to know about MY work. How awesome is that?

Well, I was surprised, but I started telling him about my work. He was thrilled and said that it sounded like something he would enjoy and that his friend would also enjoy. I told him that I would bring him one of the books. I brought him the first of the Ragnarok Rising Saga, The Awakening. He read over the back and said it sounded very cool and seemed genuinely interested in the book.

I was excited to have someone that was a well known star interested in my books. I decided that I was just going to give him the book and asked if I could get a picture with him holding it. He went well beyond that. He posed for several pictures with me and the book, then he tweeted about my book and shared the picture on his twitter feed and Facebook page. He even asked me to autograph the book for him. Me autograph for him! How amazing is that?

John is an amazing guy. Very genuine and friendly. On the final day, as the show was ending, I happened to see him making his way out of the venue. I thanked him again and went to shake his hand. He smiled and hugged me, telling me that he was glad he got the chance to meet me. He has an incredible way of making other people feel special. It’s great to meet someone so talented and yet so down to earth. He treated everyone he met like they were old friends.

All in all, VisionCon came to an end far too quickly. It was three days of fun. I’m already planning my return next year. The Dark Water Team will be making VisionCon a regular stop on our promotion schedule. Although John won’t be back next year, I sincerely hope I get the chance to see him again at another venue. Maybe he’ll show my book to someone over at the CW.

One thought on “VisionCon, Branson and John Wesley Shipp”